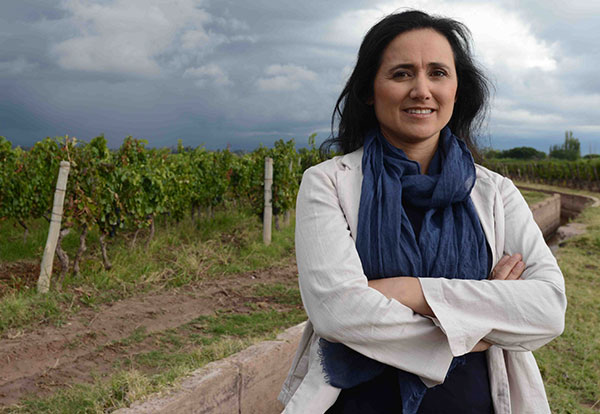 Bodega Catena Zapata sparked a wine revolution in Argentina. Vicki Denig talks to its insanely busy managing director. Dr Laura Catena is a force to be reckoned with. In addition to working in the emergency department at the University of California San Francisco Medical Center, Catena also lists managing director at Bodega Catena Zapata, owner of Luca Winery, and founder of the Catena Institute of Wine among her slew of titles.

Catena moved to New York at just two years old. At 14, she headed to France on a solo journey, studying art and history – though not wine.

"France was irrelevant in my world of wine," she says. "There was no world of wine – that was my dad's thing." She pursued undergraduate studies at Harvard, followed by medical studies at Stanford.

"I picked emergency medicine because you're constantly thinking and being active, yet there's also a huge place for extreme compassion," she says. Passion and activity are clearly the themes of her life, fueling the multiple projects to which she dedicates herself. Wine-Searcher sat down with Catena to discuss all things Malbec, including gender roles in Argentina, unstable economies, and what it takes to make a 100-point bottle of South American wine.

Where did your involvement at Bodega Catena Zapata begin?

I finished my residency in California in 1995; that year, Catena Zapata was invited to the New York Wine Experience. No one at the winery spoke English well enough to attend. I went on our behalf – and nobody came to taste our wines. I realized that elevating Argentine wine to a higher level was a lot harder than we thought. This was the moment where I thought, "If I don't help my dad, he's not going to make it, Argentina isn't going to make it." So, I decided to start working with him.

What was your original role?

Viticulture and science – US sales, too – someone had to do it. I live here [in the US], so I began working as a doctor part-time. I founded the Catena Institute in 1995, because no one could give us advice about Malbec. First, we had to see if we had the elements to make high-quality wine.

What type of research is being done at the Catena Institute?

The vision is "science to preserve nature and culture". Our job is like the restoration of an old painting; you're not there to change the painting, you're there to keep it alive for the viewing of the next generations. We are under heavy threat with climate change; I need to figure out which of my 135 Malbec cuttings do better with low water, higher altitudes, etc. We need to use science to preserve what we have. I want to understand what defines terroir as a source of individual place flavor, so that I can study how to preserve it. We're doing a really cool experiment at the Adrianna Vineyard, comparing two lots identical in their plant selection, but with two completely different soils, studying everything about the vines' behaviour; the wines are completely different.

How does one go about moving with climate change in a vineyard?

To preserve [a] vineyard flavor, we need to understand why we have that flavor, to make sure that it doesn't get altered. Because of climate change and cultural changes, like people moving to cities, we have to make decisions. Two of the biggest problems right now in agriculture, wine included, are water and labor. To solve this, you need the scientific method, you need to do studies.

How has the Catena Institute affected the local community?

We study high altitude and explore other regions. The Malbec revolution started by my dad changed the lives of people in Mendoza, thousands of people live from wine – there's a pride in the winemaking within the region, and partly because we produce high-quality wine. If we can take that model to other parts of Argentina, which are so much poorer, we can bring better quality winemaking to these regions, which I do think have the terroir, preserve the local culture, and prevent people from moving to cities.

What do you think is the next big thing for Argentina?

Understanding the terroir for Malbec – moving away from "Malbec from Mendoza", and moving towards regionality, and recognizing regions outside of Mendoza and their traditional blends.

What are some collaborations that Catena Zapata is currently working on?

We partnered with the Rothschild family of Château Lafite to make a Malbec-Cabernet Sauvignon (called Caro), the old blend that made up the grand crus of the 18th and 19th centuries. Working with the family that makes the most famous Cabernet Sauvignon based wine in the world is pretty exciting. They are passionate people that believe in tradition and history, and we share that love.

How tough is it making wine in an unstable economy?

The exchange rate of the dollar to peso is constantly changing; inflation is a problem. People who work for you are on an economic rollercoaster every year. Also, it's very hard to get credit. You may get a loan that might put you in debt (because of inflation), so it's very hard to take loans. However, the advantage of it is that you and your team are naturally austere; we save a lot, we don't splurge a lot on fancy machines. It makes you very resilient and makes you save.In Argentina, at Catena, people have a higher purpose that work at a winery. They believe in our vision to make wines that stand with the rest of the world. It makes you more idealistic, the fact that you really can't count on the money. You live more for your ideals. You want to get paid enough to feed your family, but the romantic is very strong in Argentina – you can count on that a lot more than putting money in the bank.

How are women viewed in the viticultural world in Argentina?

There are many women winemakers and viticulturalists. In our winery, we have a lot of women in high power jobs. There are definitely more men than women overall, but there are more "head" women and second level men. That might be unique to our winery.

How do you think other wineries get to this level?

We should give the same rights to men for maternity. Once you're no longer incentivized to hire a man, because they get the same benefits as women, then there's equality. Women are not oppressed, but because women [wearing the] traditional mother role is still very strong, it probably stops them from advancing more in their careers.

How did you feel when you found out that Adrianna Vineyard Riverstone Malbec was one of the first two Argentinian wines to get a 100-point score in Wine Advocate?

This 100 point thing is monumental because it cries to the world "Argentina has a terroir that can make a Grand Cru wine!" We might have high inflation, debt, and a tumultuous political history, but we can make a 100 point wine. This was the first time that a South American wine got 100 points from Parker, and this should become a source of pride for the whole continent.

What's next for Catena Zapata?

Our family winery has lasted over 100 years – how do we last as a family winery for another 100? First, we must continue to think of elevating Argentine wine as our ultimate goal. We are farmers with a patriotic mission. We have had the monumental luck of finding the site for the Adrianna Vineyard in the early 1990's; the question is how do we preserve this beauty for another century, and perhaps find other places like Adrianna.

What mark do you want to leave behind on Argentina's viticultural scene?

I want to deeply understand the flavors of Malbec in each viticultural region of Mendoza, Argentina. I also want to understand other varieties, such as Pinot Noir and Chardonnay, at extremely high altitudes in Mendoza. Bonarda and Torrontes [also] fascinate me. I want to make an Argentine wine that will age beautifully for a hundred years. Who knows if I've already made it? The beauty of this quest is that I will die not knowing what happened, my great grandchildren will find out, and that is a beautiful thing that excites me – the romance of not knowing what will happen.