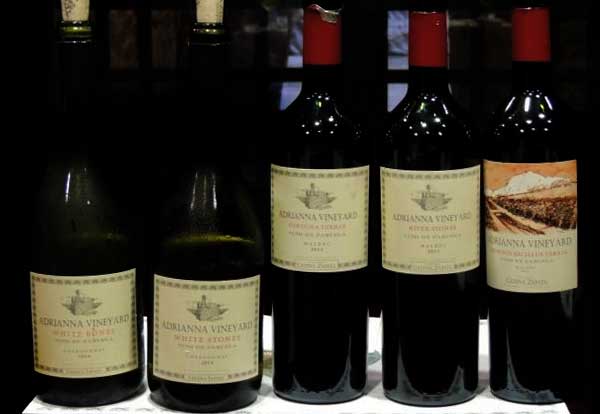 Catena Zapata is similarly a producer known for following the fine wine path, highlighting not only the the evolution and ageing potential of its Malbecs during a meeting with the drinks business, but its Chardonnays – produced from its Adrianna vineyard in Gualtallary in the Uco Valley, which rises to 1450 msnm.

Described by Catena as “South America’s Grand Cru vineyard”, Adrianna was planted in 1992 by Nicolas Catena with many at the time disbelieving of the ability for grapes to ripen at such high altitude. Catena’s intuition proved right, with the Uco now awash with high altitude vineyards. But it wasn’t until 2004 that Laura Catena began work to identify individual parcels within Adrianna, resulting in the demarcation of 11 soil-specific lots.

Recalling its evolution, winemaker Ernesto Bajda said before this time they believed that they would reach the quality potential of wines when they had “even vineyards”, focusing on finding differences in the vineyard and trying to correct them. “We thought that by doing that we would have quality, but then we realised that we were doing something completely wrong which is trying to change nature and we could only correct five factors out of 1000,” he said. “Then we understood that our job was to identify the differences and drink them separately. That was the big start of the Catena Institute (founded by Laura Catena, primarily to dig deeper into its vineyards). That year, in 2005, we made 3,500 wines from different vineyards. It was huge work, and we still make around 1,200 to 1,500 wines each year.” Catena produces a series of Malbecs from its Adrianna vineyards, alongside its two flagship white Chardonnays – White Bones and White Stones – made from vineyards with two very different soils.

“We had completely different Chardonnays coming from the same six hectare lot,” says Bajda. “We have wines that were absolutely different. We had the same altitude, 1500 all and same selection of Chardonnay. So we went to the soils and we found a huge difference. One was dry river soil of about two millions years which is nothing in geology terms. A river had wiped out the original soil and set a lot of stones there [White Stones].

“The other was an ancient soil that was the original soil even before the Andes existed and had lots of calcium carbonate and limestone and organisms from the ocean [White Bones]”, which Bajda explained had been deposited there when the mountains first erupted from the seabed. “That made us realise how important is was to study each particular place were we found a difference in the wines.”

Demonstrating the progress, in terms of quality and variety, made by Argentina in a relatively short space of time, Bajda pointed to his schooldays, when he was told that Mendoza could “never make fresh white wines because we were in a desert”. “At that time we didn’t know anything about the high altitude vineyards because our viticulture was in the lower valleys of Mendoza,” he said. “In these places you normally have warmer temperatures, but because of the altitude you can have very cool climate vineyards which means you can make fresh wines. If you considered that now we have started studying the soils the potential is unimaginable.

Pointing toward the work of Burgundy in identifying individual soil types and parcels, Bajda noted that what took them 300 years will take Argentina far less. “The idea of getting into the soil and getting geologists into the vineyard to understand the soils was not because we dreamed [the differences]. It was because we had 300 years experience of the Burgundians to look to. The difference is that they took 300 years of trial and error. In the 21st century we can apply the scientific methods, and instead of having one answer every year we can have 10 to 15 answers every year.” “Argentina already has a reputation for Malbec and red wines. On the whites we are starting first to understand and learn ourselves, but with these results I feel completely confident about having very fine wines from Chardonnay and other white varieties in the future.”